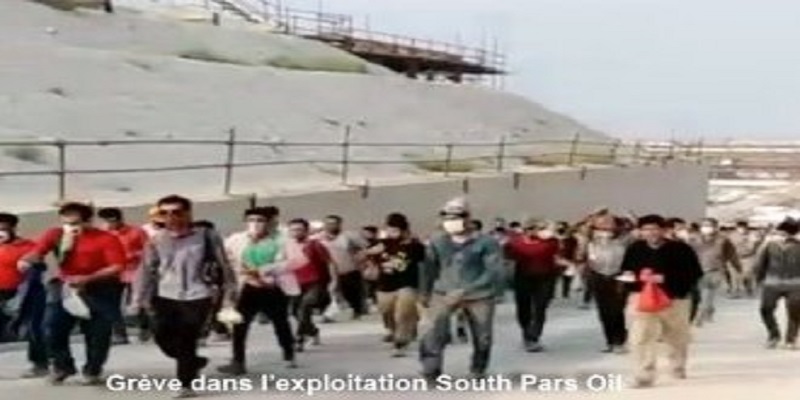 The end of the subcontracting system and the hiring of all workers with so-called "official" contracts.
An increase in wages to the equivalent of 400 euros per month.
An organisation of working time on the basis of 20 days of work and 10 days of rest. Many of the jobs are in the south of the country, where it is often in the 50s, or on offshore platforms, far from their families.
On Sunday 27 June, workers at the Assaluyeh site occupied the canteens, which they have been unable to access for three days. Their supply of drinking water is about to run out. The accommodation conditions are scandalous: 10 workers in a single room of 20 m2 on the floor, 3 toilets and showers for 400 people... And in these conditions, the workers work from 6 a.m. to 7 p.m., with only a one-hour break.

One of the issues for the strikers was to prevent the bosses from breaking the strike by calling in unemployed workers to do the work.

On 30 June, the "officials" will join the movement.

The member organisations of the International Labor Network of Solidarity and Struggle are supporting the strikers, as well as the Organising Council of Subcontracted Oil Workers set up to organise and coordinate the movement.
We welcome the joint statement by the Vahed and Haft-Tapeh unions and three other pensioners’ and teachers’ organisations.